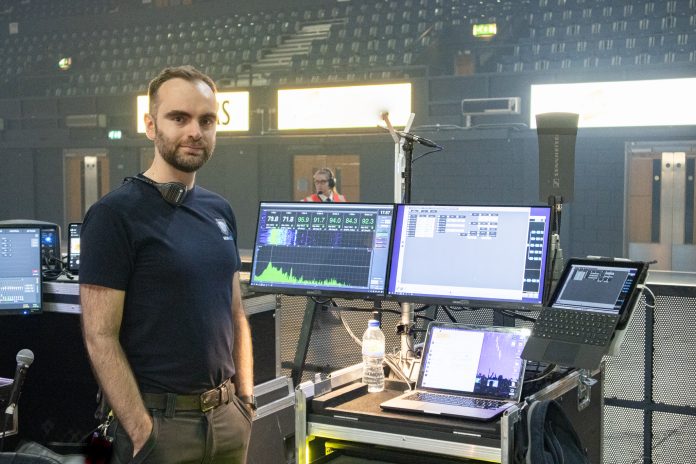 We caught up with one of our 2019 Breakthrough winners Oli who is in the midst of one of the busiest Spring/Summers ever and about to complete his very first World Tour!

I ended up behind the scenes by accident really – I had no real interest in performing on stage in my school’s productions, but much preferred the idea of making the magic happen in the dark with the more technical challenges. It was just 4 small fresnels on a wind-up stand back then, but I was lucky to be in an environment where I could really build a passion for tech production.

I was very fortunate to go to a senior school with a very well equipped theatre and music tech department, and it’s there that learned to build set, program lights, run a show and mix a band. It wasn’t until I got to university that I really started specialising in sound, before then I’d really been more of a lighting guy, but I knew the basics of sound and that’s what they needed, so I hopped onto their LS9 and started honing my skills.

Did you even know then how to start your career?

Honestly at that point I was still aiming to follow in my father’s footsteps with career in the RAF (predictably as a pilot) but I ended up getting fairly heavily involved with the backstage society at University, and before the end of my first year I had casual jobs at the SU and both of the main local theatres. Soon after I took my first freelance gig for BCS Audio and it was all downhill from there, as they say.

Did you do a course?

Not as such, I studied Acoustical Engineering at Southampton University, which is a very theory based course and not aimed at the entertainment industry at all – when I chose it, I was looking for an engineering degree and had no real plans to end up in this industry. However it’s served me well, helping me to build a more in-depth understanding of the fundamentals of room acoustics, DSP and measurement systems.

There were many people along the way who helped me in the right direction, but I’m sure I’d not be where I am without the friendship and mentorship of Nick Boulton, Tom Woolsey, and the many others I’ve worked with at BCS Audio – David Shepherd and Dave Cann gave, and continue to give me most of the shows/experience that’s put me where I am today.

How old were you when you won your Breakthrough Talent Award back in 2019?

That’s a difficult one, the amazing thing about this career is the variety of work and the locations you get to do it in. That said, I love to travel and I did a fair number of festival shows around Europe with Tom Odell as their monitor tech back in 2017, and I have some very fond memories of travelling around and exploring random European cities in my time off. It’s been great to be exploring the world again this year, albeit with a slightly busier schedule!

Like a lot of people, I started off thinking this would only be a short interruption and that we’d be back to it in no time, so spent the first month or two working on designs and projects for the summer. Quickly though we all realised that it might be a little longer, so I got a job in a local electronics factory, inspecting sensors that were in fact used in a particular brand of covid-testing machine.

After 3 months of that I managed to pick up some wiring work with The Studio People, a company that designs and builds recording studios, and I worked with them on several projects until live work started returning in the summer of 2021.

It has to be the Rick Astley tour I did in October/November 2021- Really an amazing bunch of people to work with, both within the Rick Astley team and with the support, KT Tunstall. It’s a great feeling when the whole team is firing on all cylinders and the tour just flies. Can’t wait for the next one.

This year I’ve been lucky enough to be part of my first world tour, and it’s finishing with a big show in Milan at the end of the summer which will be a really nice way to cap off a very busy spring/summer before a couple of weeks of much needed holiday.

I think it’s important to remember that career progression doesn’t happen overnight, keep your sights set and your head down and things will keep moving in the right direction. It’s also important not to measure yourself against anyone else.

I think it’s important to remember that career progression doesn’t happen overnight, keep your sights set and your head down and things will keep moving in the right direction. It’s also important not to measure yourself against anyone else.

What would be your advice to anyone who wants to work in this industry?

It’s said a lot, but this really is a very small world, and word travels fast. Be kind to everyone and don’t be afraid to ask for help – it’s much better to get help than be ’that guy’ who messed up a gig.

Co-op Live, the new 23,500 capacity and £365m entertainment venue opening in Manchester, will be the biggest in the UK and attract the best...

AlphaTheta Corporation announces an upcoming series of workshops hosted by its brand Pioneer DJ to celebrate the LGBTQI+ community. Throughout the months of June,...

Company: Stage Precision Salary: Competitive Salary We are a young and innovative software company that develops tools for the live event, entertainment, virtual production and broadcast...

Company: Stage Precision Salary: Competitive Salary We are a young and innovative software company that develops tools for the live event, entertainment, virtual production and broadcast...