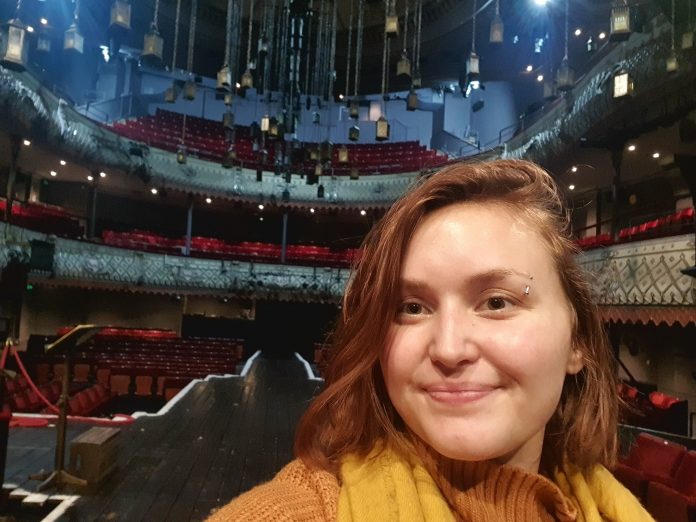 Kat Ellis won her Breakthrough Talent Award back in 2016 and was one of our very first winners.  She has gone on to have a super successful career and is proof that there are many opportunities out there given the right work ethic and resilience.  Just last week, Kat won yet another award the ‘ABTT Award for emerging excellence’ and is proudly making waves in the Theatre industry.

As I’m sure everyone who works in the industry can relate to, I’ve always been very into music and events from a young age and when I started going to gigs at 14, I became keen to explore the ‘behind-the-scenes’ of the industry. I’d always played instruments but had never been particularly keen to make performing my career, so I wanted to find something where I could be around music but not the one performing.

At first I was keen to be a sound engineer so got myself onto a short course in London when I was around 16 or 17, after which I tried to get involved in school talent shows etc. where I learnt more about lighting and stage management. I didn’t ‘train’ or study an industry related degree as I was wary of narrowing my options down too soon, so I studies Mathematics at the University of Leeds and got heavily involved in their ‘Backstage Society’ where I learnt about all the different production roles. From that I volunteered at Edinburgh Fringe and gradually built up my experience before becoming a technician at a circus venue in London.

In regards to my work in music/live events, it was just a chance meeting really! I met someone through a friend of a friend who was a Stage Manager for Y Not Festival over drinks one night, he could tell I was excited by the prospect of his job and so invited me to volunteer as his stage crew. This was after a few beers, so I wasn’t sure if it was a real offer, but I followed it up and through that I met a variety of people who have helped me get festival gigs to this day and I am now stage managing that very stage at Y Not Festival this year!

Did you know then how to start your career?

Absolutely not! Even now, I don’t fully know how to build a larger career within music/live events as my career is primarily in theatre these days!

Did you do a course? If so, where?

I did not do a production related course, although I did consider some music production courses. I studied Mathematics at the University of Leeds, and built up my knowledge of production through student societies and volunteering. Just being super keen to get hands on experience!

Tom Kitchen, Stage Manager for a load of UK festivals, has been a big influence and help in progressing my career. He saw something in me at Y Not that first year and since then has really helped me work my way up.

How old were you when you won your Breakthrough Talent Award back in 2016?

That’s a really tricky one!! I’d say one of them was working with You Me At Six at Y Not one year. They had been one of those bands I’d seen when I was 14/15 so x number of years later being able to work with them was pretty special. Another one was seeing audiences come back for the first time since lockdown for our production of Bagdad Cafe at The Old Vic.

​​During lockdown, I was lucky to be furloughed for the first few months and then from July 2020 onwards I was in and out of work as The Old Vic developed their ‘In Camera’ series. During which, I did all sorts of things from my main job of Deputy Production Manager to building puppets, prop sourcing, covid monitoring and furlough payroll!

​I’ve been working full time at The Old Vic as Deputy Production Manager for the past couple of years which has been an amazing opportunity to work on such a wide variety of theatre productions. On top of this, I’ve stage managed at a variety of music festivals as well as working as a freelance Production Manager for Passion at The Hope Mill Theatre. Furthermore, I just won another award from the ABTT (Association of British Theatre Technicians) the other day which was very exciting!

​My highlight of 2021 was probably reopening to audiences again and watching everyone be excited for their first time back at the theatre. Also, working my first festival in a couple of years! It was so great to be back in a field again

How about this year?

​Probably two things – one of which was helping run the first Old Vic Backstage scheme, mentoring 2x aspiring production managers working on our show of A Number. Secondly, getting heavily involved in the implementation of the Theatre Green Book at The Old Vic and working on how we can make a more sustainable industry

Take every opportunity you can and ask all of the questions you can think of!

Take every opportunity you can and ask all of the questions you can think of!

Any advice to anyone who wants to work in this industry?

Same as the above really, put yourself out there and take the opportunities that come your way. Follow passing conversations up as you never know where they might lead!

I’m just looking forward to seeing what gets thrown my way and how things progress! Plus seeing sustainability become a bigger and bigger part of events and theatre.